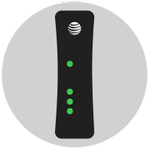 I am thinking of adding an external hard drive to my HR24 receiver.  Can I then access this drive from another receiver over my ethernet?


I am thinking of adding an external hard drive to my HR24 receiver.  Can I then access this drive from another receiver over my ethernet?

The only external hard drives that may be used are eSATA.

Receivers connect to each other over DirecTV's coax, not Ethernet.

External drive replaces internal so they cannot see each other, a protection against copying. So make sure the external is larger to be worth it.

Regular HDDVRs support up to a 2TB external. Your HR24 has a 500GB internal.

Genie DVRs (HR34, HR44, HR54) have a 1TB internal. Initially was supporting up to 4TB external, but many go higher (such as 12TB and 16TB) and have not mentioned issues.

I do not want to upgrade to Genie, but I am looking to have the Whole Home feature of allowing a second receiver access the HR24 DVR. Directv does not offer this option.

@downeast_watchr wrote:
I do not want to upgrade to Genie, but I am looking to have the Whole Home feature of allowing a second receiver access the HR24 DVR. Directv does not offer this option.

What are the model numbers of your other boxes along with the HR24?

It should be possible to enable Whole Home DVR sharing, depending on the other box model numbers.

I have one other DirecTv receiver, H21-100, and both receivers are connected on an ethernet network.

@downeast_watchr wrote:
I have one other DirecTv receiver, H21-100, and both receivers are connected on an ethernet network.

If you have a Single Wire Multiswitch dish, then you just need a DECA coax network adapter for the H21.  Remove the HR24's ethernet cable and call DirecTV to activate Whole Home DVR sharing on your account.  1 800 531 5000

So you can get the boxes setup for the service. It will still add $3 for Whole Home DVR to your bill.

However if you have a HR21, HR24, and H21 it would be suggested when you have a free upgrade to replace the H21 with a Genie (current models HR44/HR54). That way you get more tuners (Genie has 5, regular HDDVR has 2, HD non-DVR just 1), recording space (Genie has 1TB, HR24 has 500GB, HR21 has 320GB, H21 cannot record itself), and the only difference in cost is the $3 for Whole Home DVR that you would be adding anyway. If you rely on the Autotune feature of the H21 (not available in any DVR model), you could consider replacing the HR21 instead, being your oldest HDDVR with the smallest hard drive. Just be caught up on recordings first as the replaced DVR's recordings do not transfer to the new one.

Do not replace existing HDDVR (or H21) with Mini Genie Client as that would be losing capability as they do work with the regular Genie line.

Do not get the Genie-2 (HS17) as this forbids HDDVRs from being on the account so is more restrictive on tuners and some options as Clients cannot have full separate settings if desired.

I have same problems. I am using this external SSD in conjunction with a Samsung internal SSD in my HR24 receiver.. The data transfer speeds are AMAZING. You can look for an alternative here https://whatever-tech.com/best-external-hard-drives-for-macbook-pro/. Using this 1 TB drive with the USB 3.1/Gen 2 cable is delivering the indicated speeds. I have also upgraded my laptop to a Samsung SSD and they are ALL providing outrageously FAST data speeds. I would heartily recommend ANY Samsung SSD.


I have same problems. I am using this external SSD in conjunction with a Samsung internal SSD in my HR24 receiver..

It is against DirecTV's terms of service to modify the inside of DirecTV boxes. Recordings are encrypted to the DVR so transferring, even when using your own hard drives is not allowed. The internal is supposed to be disabled while an external is connected for this reason.

Since the HR24 has a 500GB internal, then a minimum of a 1TB external should be used to be worth it. Unlike the Genies, regular HDDVRs have a hard cap of using a 2TB external at max. The Genies initially had a suggested cap of 4TB, but so far with people using up to 12TB, haven't heard of an actual/official hard cap. With a multi-TV system still best to have Genie and HDDVRs instead of Clients for more capability and reliability to go around.

Here to help you with your external hard drive, @maryremi.

To help us further assist you with this case sensitive matter, please confirm your account number.

Looking forward to hearing from you.