No, that isn't true.  DIRECTV Now is limited to online chat support.  DIRECTV STREAM has support by chat or phone.

@romeo1432 - the FAQ on how to cancel is here.   Unlike DIRECTV Now, which you can cancel online by yourself, you do need to contact DIRECTV Customer Service to cancel DIRECTV STREAM because you are under contract.

Have you pursued trying to get your usage issues resolved?  The people here (other customers) are generally more helpful than "official" support when it comes to technical issues using the service, so if you post here, we could try to help if you like.

you have to chat in, DIRECTV STREAM is handled via chat

Semi-entertaining that they felt the need to convert all references to AT&T TV to DIRECTV STREAM in my earlier post - we'll see if they are still at it (I think they stopped, but maybe not).  It's not clear from the editing whether the "Now"s they left were from DirecTV Now (which I probably wouldn't have said in November of last year) or AT&T TV Now (and they converted part of it part way).

Unlike AT&T TV Now, which you can cancel online by yourself, you do need to contact AT&T TV Customer Service to cancel AT&T TV because you are under contract.

Note that AT&T doesn't really have anything to do with this anymore - DirecTV is a separate company and they run their own ship (badly, so far).  (They are still using AT&T login services, but that's apparently a service they got at least temporarily as part of the spin off, not because they are still AT&T.)  It appears phone support is no longer available for anyone who has a DIRECTV STREAM (that capitalization is terrible, and they aren't consistent with it), regardless of whether they are under contract or now.  I have no idea how much pain they put people through to cancel through their chat reps.

However, I just checked, and taking the "MANAGE MY SUBSCRIPTION" link off the "MY TV SUBSCRIPTION" box on the "Account overview" choice from the sign-in on the directv.com site (or from the settings button from the watch page) takes me to a "Manage my TV subscription" page (pretty much the same as when it was AT&T TV).  I don't know if this applies to all DIRECTV STREAM subscribers or just those without contracts (or maybe just those that were formerly AT&T TV Now subscribers) but I certainly have a "Cancel my subscription" link in the "Current TV  subscription" box (the topmost one).  Are you saying you don't have this, or that clicking it doesn't actually let you cancel?

All you have to do is login to your DirecTV Stream account and cancel there. 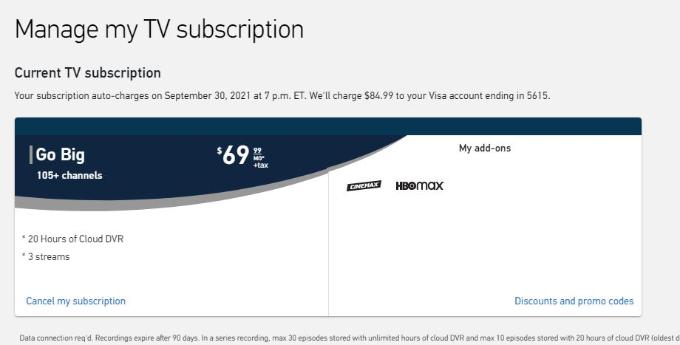 Is being able to cancel online from your account something that has came about within the last week or so? I'm asking because whenever I cancelled my service I had no option to cancel within my account online.  Instead I had to call them and it took me over an hour to get cancelled.  Was transferred several times and put on hold only to get disconnected, etc.....It was a real pain..........

It's always been there since I have had the service (since it's conception). Of course the service has changed over the years and the page layouts have varied.

Thank you....do you have directv Now or the new directv stream? maybe the legacy service has the option to cancel online but I did not have that choice when I cancelled....I had to call which is very inconvenient......I would keep my subscription longer if I had the luxury of cancelling online and not having to call.

It's the same. Was DirecTV NOW then AT&T NOW, now all is DirecTV Stream. Grandfathered subscription.

Please create
a detailed post from your profile, so we can take a closer look.

Subscribers who are under contract (legacy from the original AT&T TV) can't cancel themselves, but have to do so through Support (since there are ETF issues. etc.)  Perhaps they can after their contracts lapse.  I would have assumed all month-to-month subscribers (legacy AT&T TV Now, recent AT&T TV, or DIRECTV STREAM) had the same self-cancel ability, but perhaps not.  I certainly see a cancel link on my Manage Subscription page.  However, there was a recent post indicating that the link didn't actually work.  If that is true, I'd chalk it up to DirecTV as a separate company is new and they likely don't have all the account management stuff (or a number of other things) working correctly yet.

Yes there’s definitely a link to cancel within account overview but whenever you click on it it says “ chat with a representative to cancel or call us” so definitely can’t cancel online. They need to give us the ability to do that.

Then this has changed since the take over. I have a friend and family member that have used the cancel several months ago.  Upon cancelling they both received an email of the subscription cancellation. Also there accounts show inactive.

yup whenever I had ATT Now a year ago it let me cancel within my account but not now...that cancel service link leads me to a prompt that says chat to cancel or call us.......took me over an hour to cancel the service because they couldn't seem to get me to the right department.  After going though all of that I decided to not cancel just yet because I'd like to continue testing the service a couple more months but will dread the cancellation process, however, someone on Reddit gave me a number to call that goes directly to their loyalty department.  Out of curiosity I called the number and it did indeed go right to the directv loyalty department so whenever I cancel next time hopefully it won't be a fiasco but I do think they should have left things alone and we should have the ability to cancel the service ourselves; if they give us the ability to activate and reactivate service then why won't they let us cancel the same way......

Yes there has been a shell game with the name of the service and they cannot get one that doesn't confuse people.

DIRECTV NOW, AT&T TV NOW, and DIRECTV STREAM are (in order) the names the streaming service has had.

DirecTV is the satellite service.

Naturally this causes many to confuse one for the other. And with those changes, including the new co-owner on the last one, support options 'might' be different depending if you have current or legacy service.